The Lake Troy District Railroad is an HO scale fictional, regional-sized subsidiary of the Southern Pacific that exists somewhere in the approximate Midwest of the USA, roughly in 1958. It doesn't model any specific prototype, but does move a wide variety of freight, including coal, grain, refrigerated products, express, and a little bit of livestock. Switching is the main task on this layout, and most trains (even some of the passenger trains) do at least a little switching.

Because of the era, there are still a few of the last remaining big steam engines, but most road power is first generation diesels, with a heavy emphasis on Fairbanks-Morse and Alco road switchers, and FM and EMD cab freights, with a few Baldwins thrown in for variety. 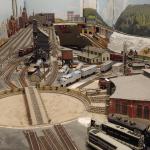 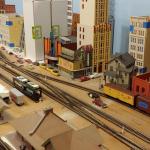 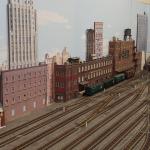 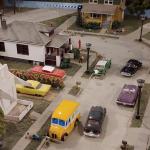